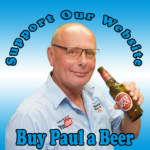 We work very hard in our warehouse making free video guides for you all on cookers, ovens and washing machines Etc.

We always appreciate a beer or two after a hard day filming and writing the appliance repair guides. You can buy a single beer or a round for all the staff whichever you prefer.

Click any of the images to buy us a beer.