How a NTC Sensor works on a Tumble Dryer

The NTC sensor is normally fitted to the hot air fan duct. This sensor consists of a resistor contained in a metallic
capsule. Its resistance decreases as the temperature increases.
The electronic circuit reads the resistance (which varies with the temperature inside the dryer); when this
resistance falls below a certain value, the heater unit is switched off. As the air cools, the Resistance
increases; when it reaches a given value, the electronic circuit re-connects the heater unit to the power
supply. This occurs each time the temperature inside the dryer exceeds a given value, which varies
according to the drying cycle that has been selected. 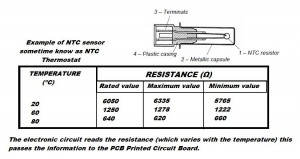 What is an Tumble dryer NTC Sensor?

Check all connections first to the sensor and to the board they may have come loose, you are sometimes unlikely to see anything physically wrong but there might be a bad connection. Diagnosis is done by measuring the resistance with a continuity (or multi) meter. We can’t give readings for all thermistors because they vary, see my picture for an example, but you should be able to get a reading across both terminals. If it’s completely open circuit it’s likely to be faulty.

See our Other Tutorials on Tumble Dryer Heating Systems