One of the most common problems to occur with a washing machine is for the door seal to get torn or damaged. This can normally be detected by the washing machine leaking.  In this tutorial we will explain how to remove the old door seal and fit a new one.

Step 1 - Safety Advice
Safety First! Please make sure that you have switched off or disconnected the machine from the mains supply before beginning the repair.

Step 2 - Find the Correct Door Seal For Your Model
To make sure you’re ordering the correct spare for your appliance, you will need the model number. This is usually found on the inside of the door on a plate.

Step 3 - Remove the Upper Lid
On this model to access the door gasket we will need to remove the whole front panel. To begin, take off the upper panel by removing the screws at the back and then lift it off.

Step 5 - Remove the Kickplate
To remove the base plate, use a flat headed screwdriver to release the filter flap. Carefully pull out the front drain hose and remove the screw, the kick-strip should then come off.

Step 6 - Remove the Front Panel Including Door
To start removing the front panel, we’ll need to remove the outer retaining band fixed around the door seal. We recommend using a flat head screwdriver to ease it out.
You can then ease the door seal off the outer lip of the washing machine and fold it into the drum. Then remove the two screws for the door lock. You’ll also need to remove the two screws at the top and then the three remaining screws at the bottom and the outer panel should come off.

Step 7 - Remove the Inner Retaining Band And Door Seal
Now you have the outer panel removed, disconnect the hose that connects to the top of the door seal. You should see a sprung band fitted around the inside of the door seal. I recommend using a flat head screwdriver to ease it off as it can be a bit tricky. Now the door seal gasket should easily come away from the inner lip.

Step 9 - Fit the New Door Gasket
With the faulty seal out the way you can wipe away any dirt or grime around the drum using a cloth. Take the new door seal. The small pipe at the top of the old gasket is not sold with the new part, so make sure you dont throw it away. Then slide the pipe from the bottom of the seal to fix it in place.
Please Note: Make sure the drain holes at the bottom of the door seal fit at 6 o’clock on the drum. You should see a small arrow on the top of the seal which aligns with the arrow at the top of the drum.
To make the job easier for you, rub a little bit of washing up liquid on the lip of the door seal. Make sure the arrow of the seal is positioned correctly before working the seal lip around the drum.

Step 10 - Fix the Inner Retaining Band To The Door Seal
The hardest part of this repair is getting the inner band around the door seal, so an extra pair of hands is useful.
We are going to use two flat head screwdrivers to help us. Get the sprung part of the retaining band into place using your hands and manually fix as much of the band as possible. You can then use your two screwdrivers and work the band into position. It’s very similar to changing a bicycle tyre, take care and make sure not the puncture the door seal itself.

Step 11 - Reassemble The Appliance
Once the inner retaining band is in place fit the hose onto the top of the door seal and you just need to reassemble your washing machine back together again.
If you need to locate the correct door seal for your appliance, we are sure to have the correct part for you.

If you notice leakages from your washing machine not at the door but underneath the washing machine, then the drain hole door seal may require replacing.

Before doing any work on the appliance, disconnect it from the electric supply!

If you’ve got a leak on the front of your washing machine it can be caused by a door seal that’s either ripped or torn. Leftover water and detergent can gather at the bottom of the door gasket and over time cause the seal to mould over. Also the gasket lip can become damaged if clothes are jammed between the door glass and gasket (rubber seal) and also if hard objects are left in pockets etc. This is not a technical fault; it is caused by incorrect machine loading. 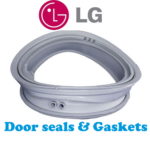