Tumble dryer is not turning? How to find the fault and replace motor capacitor

Tumble dryer is not turning? How to find the fault and replace motor capacitor

If your tumble dryer is not turning it is usually one of these three faults.This video will help you with all these makes of Tumble dryer Ariston, Electrolux, Ignis, Indesit, Neutral, Tricity Bendix, Whirlpool and White Knight that are struggling to turn? It’s likely to be a problem with the capictor or belt.

The manufactures above also make different types of tumble dryers which might have access to the motor in a different way you will have to see our other videos on this.

How to replace a tumble dryer motor capacitor.

If power is getting to the tumble dryer but all you can hear is a humming noise then the motor or drum could be physically jammed. A more common explanation though is a faulty motor capacitor. Many tumble dryer motors use a capacitor start and if the tumble dryer capacitor goes faulty it may not produce the big kick of electricity which is needed to jump start the motor. It’s also possible for the motor itself to be at fault, maybe it has start windings instead of a capacitor and what you think is a capacitor could be a suppressor filter. Do not mess with this fault if you don’t know about capacitors, they can carry a large electrical charge and can give a very nasty shock – even some time after the dryer has been unplugged! They always need to be discharged first.

A good way to test is push the tumble dryer’s drum by hand and quickly shut the door which has allowed the motor to run see video for this. This implicates the start capacitor if one is fitted. Basically I put the dryer on and when it hums open the door, spin the drum and close the door quickly. It’s difficult to do as you can’t get the drum to turn much as it has a lot of resistance. I do it a differnt way in the video so be very careful not to do this if you do not have any idea about electrics

If this general advice doesn't reveal anything simple you need to call in an engineer or friend who has electrical knowledge.

4 Modern tumble dryers also have sensors and pcb's (Printed circuit boards) these have programs that can fail and circuitry although most should produce an error code showing you were the fault is.

5 Faulty connections and burned wires may also be the fault.

WARNING: Capacitors can hold a electrical charge after the tumble dryer has been unplugged. Don’t mess with them unless you know what you are doing. 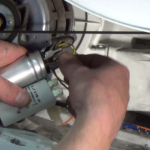 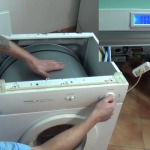 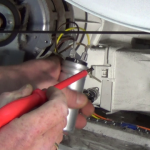 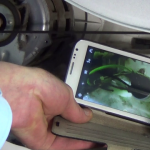 24 Responses to “Tumble dryer is not turning? How to find the fault and replace motor capacitor”