How to test and replace the heater, thermostats, Ntc sensor

How to test and replace the heater, thermostats, Ntc sensor

If your tumble dryer is not heating and laundry comes out cold and wet you generally need to call an engineer, but there are a few things you can check. There is a good chance that it is a fault with the heater system. When your tumble dryer is not heating it is either a faulty heating element, or a faulty stat or TOC. (TOC is an acronym for thermal overload cut-out and it’s essentially a heat activated fuse). The Ntc sensors can also be faulty other common causes are faulty connections, and float switch or condenser sensor faults in condenser dryers.

6th sense Thermostats, TOC’s and Ntc sensors sometimes all look the same. Sometimes they look virtually identical on most common tumble dryers. They tend to be small, round about 1 cm wide with two wires connected either side. On Theromastats & TOC’s Power flows through them to the heating element (or on the element’s neutral return) until a heat sensitive bi-metal strip inside bends under a specific heat temperature, and breaks the connection inside.

With Ntc sensors the temperature is controlled by the PCB by means of a NTC temperature sensor, This sensor consists of a resistor contained in a metallic capsule. Its resistance decreases as the temperature increases. The electronic circuit reads the resistance (which varies with the temperature inside the dryer); when this resistance falls below a certain value, the heater unit is switched off. As the air cools, the Resistance increases; when it reaches a given value, the electronic circuit re-connects the heater unit to the power supply. This occurs each time the temperature inside the dryer exceeds a given value, which varies according to the drying cycle that has been selected. All sensors have given values and need to be checked accordingly. See the workshop manual below for the correct values on this 6th sense Whirlpool Tumble Dryer and some models of Bauknecht, Laden & Maytag.

The heater is easily checked by doing a continuity test across the two sides of the circuit see video for this. 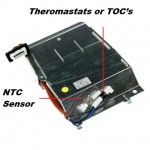 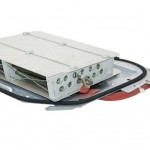 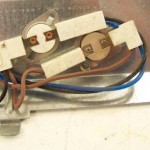 13 Responses to “How to test and replace the heater, thermostats, Ntc sensor”